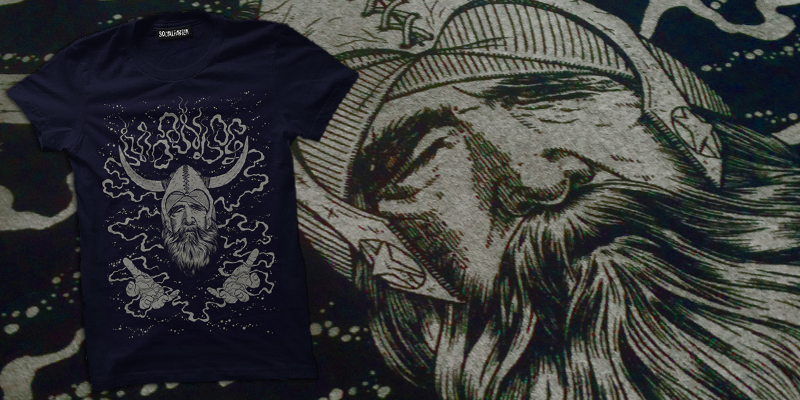 This piece is a tribute to the legendary Moondog, the eccentric blind composer, poet, musician & inventor of musical instruments who deliberately lived on the streets of NYC for 20 years. Thanks to his unconventional outfits, based on his own interpretation of the Norse god Odin, he was known for much of his life as "The Viking of 6th Avenue"

His music has been covered by artists such as Janis Joplin, Prefab Sprout and Antony & The Johnsons to name a few. The track 'Stamping Ground' was featured in the film 'The Big Lebowski' and the track 'Bird's Lament' was remixed by Mr Scruff for his tune 'Get a Move on'.

Drawn in his highly detailed trademark style, Ben's illustration has a cosmic tone reminiscent of Jack Kirby's comic art for Silver Surfer, Fantastic Four & New Gods. The artwork has been screen printed on a navy 100% cotton 'Earth Positive' t-shirt and is available from www.socialfabrik.co.uk for £25.