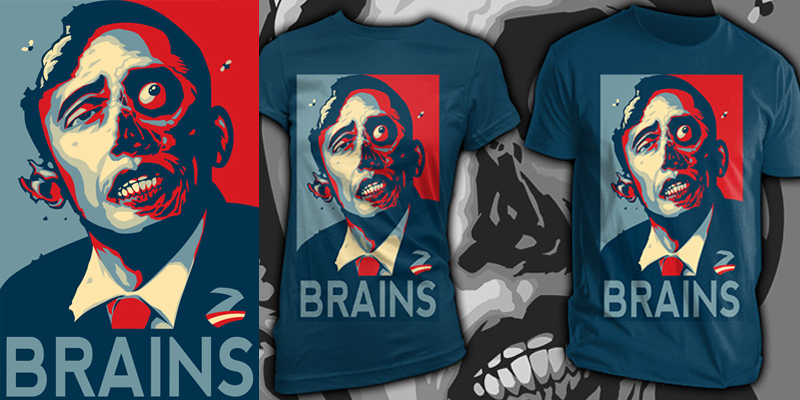 President Barack Obama has made a few perceived missteps in his presidency so far, and some are worried he may be taking us in the wrong direction, and that the hope and change he spoke of were just more empty political promises. Some wish they had instead voted for Barack's undead twin brother, who was also running, but didn't quite get enough votes to snag the Democratic ticket. I'm guessing it was his campaign slogan that let him down -- "Brains" just doesn't have the same stirring and inspiring ring to it that "Hope and Change" does (especially when it's merely a statement of what the candidate wishes to eat). Still, Zombama's candidacy was just as historic as his brother's win, as it marked the first undead candidacy in US history. Won't you celebrate this remarkable accomplishment with this commemorative ZOMBAMA t-shirt?

There are many possible meanings and interpretations of this design, but if you're intent on assigning some sort of racist, hate-filled vibe to it, then I suggest you take a long walk off a short pier. This is a commentary about rabid Obama fan-mania coupled with the news that he may not actually be the returned Messiah after all, as well as a non sequitur parody of appropriation art. This is not a cheap photo-manipulation of that other Obama piece, though it's obviously based on it -- it's completely hand-drawn from scratch, then rendered in Illustrator.
Zap!

ADDENDUM: The second printing of this shirt is now available in Men's and Women's sizes at my BIG CARTEL shop via the link at the right.